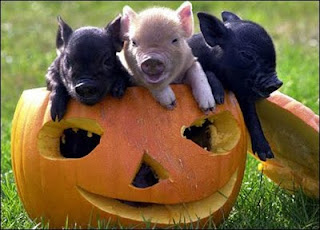 (this picture was just too cute not to post)

It's hit our house.  When we took Eriks to the pediatrician yesterday he tested positive for flu and the doctor said that 97% of the cases the office has seen have been swine flu.  Since he has symptoms more typical of swine flu and not seasonal flu she's pretty sure that's what he has.  I called my doctor yesterday and asked what she wanted me to do because I have some underlying health issues that make me a high risk case.  She's prescribed Tami.flu as a preventative.  I don't have any symptoms yet.  Thankfully.  But I'm going to be taking a 1/2 dose for 10 days to keep me from getting it.  We're keeping an eye on Emi and thus far she's OK.  And so is Lane.  Eriks is almost over it.  Yesterday, he was acting like he was perfectly healthy.  Talking to people who know other people who have had kids with this strain of flu, this is about how their kids were too.  Sick with high fever for the first 24 hrs and then a slight fever for about 1/2 a day and then nothing.  Still highly contagious though.  Eriks only has a 4 day school week because of parent-teacher conferences tomorrow.  He was at school on Monday but got sick in the afternoon and came home with a fever of 103.  Tuesday fevers were in the 100-102 range.  Yesterday 99-100 (a.m. only).  Today, nothing - 98.1.  So he's been out of school the rest of this week and will return to school on Monday with lots of makeup work to do.  At least he'll be able to go trick-or-treating Saturday.  That was what he was most worried about.  I'm so glad he's not getting sick with it today because Halloween trick-or-twould bereating  absolutely out of the question and he'd be super upset.

I thought we'd avoid all this piggy flu stuff but apparently not.  Oh well.  At least it's not as bad as I had feared it to be which is really good.  Besides the fact that my daughter has developed an aversion to eating, we're OK here.  All of a sudden Emi has decided she doesn't want to eat.  She was having some issues last week moving her bowels and I'm not sure if that's why she doesn't want to eat.  She might be afraid of getting stopped up again and having pain in her tummy.  I figure that when she's ready and hungry enough, she'll eat.  In the mean time, I'll probably get some Pedia.sure to supplement to make sure she gets nutrients.