Emi is definitely about to turn 2.  She is into EVERYTHING!!!  Her fascination right now is technology, especially phones.  She will seek them out.  She unbeknownst has not only called Lane (on more than one occasion) and my brother she has also sent texts to Lane and my mom.  She has called Lane from our home phone by hitting redial without me knowing.  I'm busy doing whatever I need to be doing at the time and I'll get a call from Lane asking if I called.  Umm, no.  Must've been Emi.

The other night she didn't realize I was sitting on the floor next to my bed.  She toddled in and went straight to Lane's nightstand searching for some sort of goodies.  Of course sitting there was his work Crackberry and his personal cell.  Did she choose one?  Oh, no.  She had to have both.  I crawled around the bed where she couldn't see me with camera in hand and got this photo.  Because I was on my hands and knees and trying not to be seen, the photo came out a little blurry but she got caught red handed.

The funny bit about all of this is if she's playing with remotes, i*Pods, phones or rummaging through drawers if she gets caught she'll react in a few different ways.  One, she'll jump because she doesn't expect to turn around and see us.  Two, she'll just laugh and smile or three, she'll smile and put it back exactly where she found it.  I have seen her open the drawer she hauled whatever it was out of, and place it nicely back where I left it.  She doesn't just throw it back in, she'll actually put it where it was.  In the case of getting caught in the photo below, she smiled at me after I took the photo.  What a stinker!! 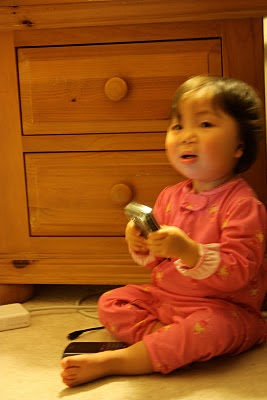