Every 5 years the Latvians hold a song and dance festival here in the US.  In 2007, it was right here in my hometown of Indianapolis.  There are Latvian song and dance festivals all over the world.  Next year the largest one will be in our homeland of Latvia.  The Canadians do one as well that I've attended multiple times in my life.  I'm sure there are others all over the world where Latvians live.

Last Friday, Lane, Emi and I hopped in the car and drove the 4 1/2 hrs to Milwaukee to see Eriks dance in his first ever songfest.  We originally had no plans on going as it's an expensive trip between hotel, food and all the other activities.  But, when it came down to it, we could NOT miss seeing Eriks participate in his first one.  So we found a way to come up with the money to go up for one night to watch him dance.  Eriks had left on Wednesday with my parents and sister.  He had no idea we were coming.  He thought we were staying home.  So when we arrived and knocked on the room door, he opened it and couldn't believe we were standing there.  He was happy but then went right back to playing his DS.

Friday night was the big dance performance.  I was told that there were roughly 600 dancers participating from all over the US, Canada and Latvia.  I enjoyed the dances and it was fun to watch both my sister and Eriks dance.  However, I do have one big complaint about the program.  Whomever choreographed how/where the groups were dancing and choreographed the lighting for the performance should've been fired.  It was horrible.  So many of the dancers were dancing in darker areas of the arena it was not only hard to see them, but hard to see the actual dance.  They also used some weird colored lights on some of the dances so it was hard to see because of the colors of the lights.  That was truly disappointing and a huge complaint by most everyone I've talked to since the performance.  They all thought the same thing about the lighting especially.  Although everyone who has seen my photos from the performance loved them, I was disappointed because lighting played a huge part of it and I didn't want to attach an external flash with a bounce card and distract someone who was trying to watch the performance so all my photos are taken without flash and using the lighting that I had in the arena.

We go to see friends we hadn't seen in awhile and got to meet some new people.  The main hotel where the song and dance festival was based in was always busy.  On Saturday, the second to last day, we got drinks from the bar and the bartenders said they had already run out of certain brands of alcohol.  I wish they'd listen to the organizing committees when they're told to order extra liquor.  We had the same problem here in Indy 5 years ago.  The hotel that was home base didn't listen to the committee and started to run out too.  I'm sure that hotel made more money though in those 4 days than they ever thought.  I'd love to find out what their profit was for those 4 days.

So here are some photos from the fun festivities.  I really wish we had been able to afford to go for the entire time.  With that being said, I'm glad we got to see Eriks in his first ever big performance and that we were able to go at all. 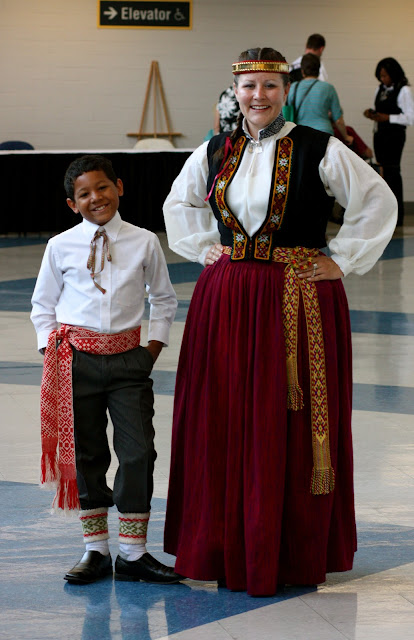 Eriks and my sister in Latvian folk costumes.  My sister is actually wearing mine! 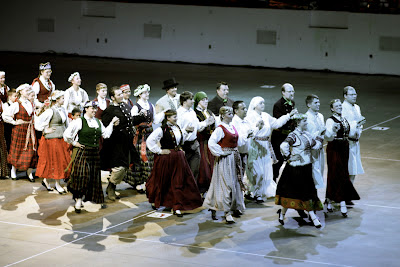 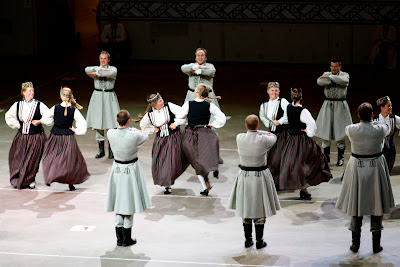 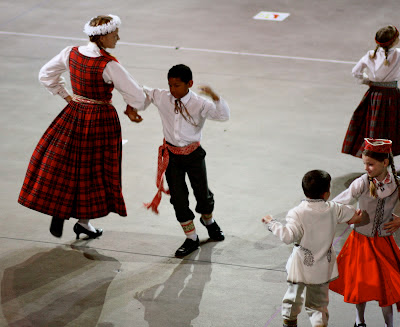 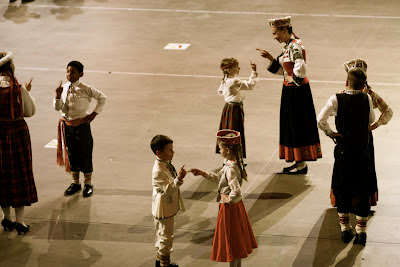 Our very small kids group.  Three of the members stayed in Indy and didn't participate.  Half of those dancers are related to me as one is my son and 3 of the girls are my nieces! 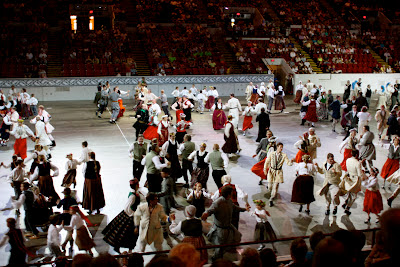 This is a wide angle shot of many of the groups dancing one of the 25 different dances in the program. 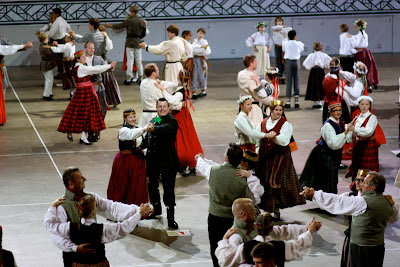 My sister dancing with Jautrais Paris. 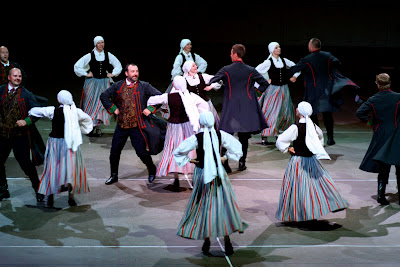