Lane and I exchanged vows in a chapel in Las Vegas.  The elopement wasn't completely planned.  It happened when I found out my insurance company would not pay for the heart surgery I needed.  We were engaged to be married and planned on getting married in May of 1997.  My health wasn't exactly where we wanted it to be and knew that surgery was necessary.  So sometime in July, Lane and I decided my health was more important and his insurance plan would cover me.  So we semi-quietly got married.  Our immediate family knew and a few close friends but not anyone else.  We had the wedding we still wanted to have in May as planned.

It's still hard to believe that after only knowing Lane for 8 1/2 months, I married him.  We met at a wedding in December of 1995 and started dating in February.  He proposed in June and we got married in August.  Lane and I dated long-distance our entire relationship.  I'm one of those few people that can say, "He proposed on our 3rd date."  Lane is one of the best things that has happened to me and has a person with a serious CHD, he has been the rock I've needed through all the ups and downs of this disease.  My parents were good supporters when I was younger, but as I got older, I think they felt as though they still had to protect me like they did when I was a child.  Parents of CHD patients are always so fearful when it comes to their special kids.  With Lane, at the age of 27, I rode my first roller coaster.  My parents would've never allowed me to.  Even after I told my mom what I did and how much I loved it I got a lecture.  Lane has let me decide what I want to do unless of course he thinks it's a serious danger.  Unfortunately my roller coaster days ended 5 yrs ago when I had my ICD placed.  I'm still bitter about that.

Fifteen years passes in the blink of an eye.  There is no better person for me to spend those 15 yrs with than Lane.  I am truly a blessed woman to have such a wonderful man willing to take care of me when I'm at my worst.  Someone who time and time again has held my hand as I'm a tangle of wires and IV's and have a breathing tube down my throat.  He has put up with my OCD ways and my craziness.  He even loves me when I'm angry with him.  And I love him for all that he is, all that he has, and all that he has sacrificed for me.  Love you Lane!  Happy Anniversary! 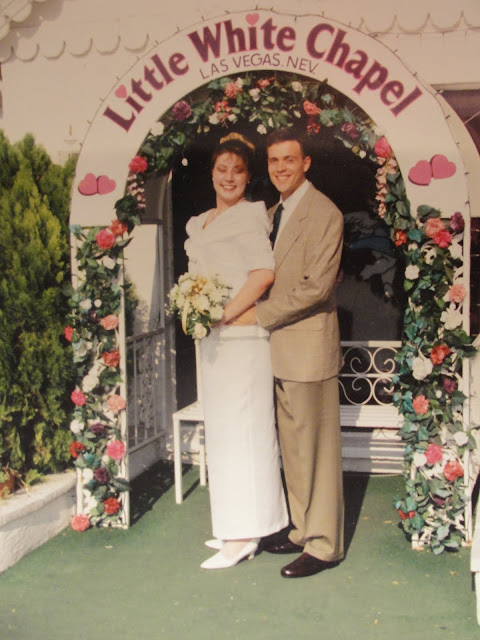