Last Thursday night after putting Emi down I was getting myself comfortable for the night.  Changing into pj's, etc.  While I was doing so Lane came in and said, "Go peek at your son."  My first reaction was, great, what is he doing now since a fair share of his activities include naughty behavior.  When I peeked out of my bedroom into his, I did not expect to see what I saw.  It made me feel guilty for thinking the worst.  So what did I see?  This. 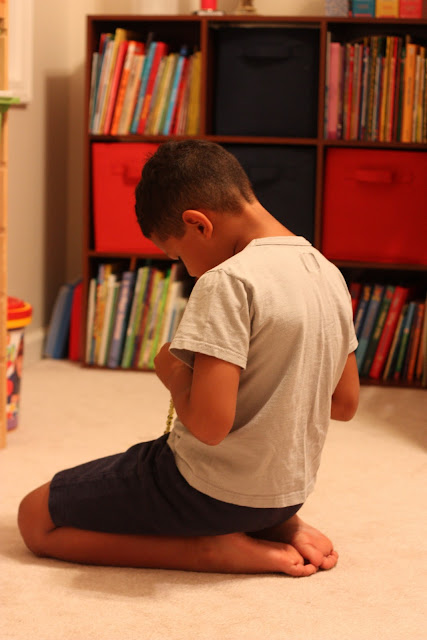 For those of you don't know, Eriks is saying the Rosary.  As most of you know or now know, we are Catholic and that Eriks attends a Catholic school.  We began teaching Eriks how to say the Rosary when he was about 3.  He's now saying it on his own in English & in Latvian no less!  I was very proud of him when I saw the above photo.  I'm hoping his godparents are proud too.

Eriks does have his fair share of missteps.  We're still waiting on a diagnosis on his behavior.  I'm not going to get to into it because it's going to make me mad.  His doctor has been unable to reach his teacher to speak with her.  The doctor says she's calling his teacher several times a week without being able to contact her and she's not returning Dr. L's calls.  His teacher is married and a mother so I'm trying to figure out why she isn't returning the docs calls.  If this were her kid I'm certain she'd expect her child's teacher to respond to the doctor.  It has been 2 months since Dr. L started trying to contact her.  What even baffles me more is that Dr. L also wanted to talk to his kindergarten teacher from last year and she was able to speak to her easily.  By the way, his K teacher is a single mom of 2 boys who are very active in sports.  Eriks talked about all the sports they played last year.  Before the school year I had talked with some 1st grade parents who were not impressed with her.  I'm not getting a warm fuzzy feeling from her either.  Eriks likes the other 1st grade teacher much more, but he adores his classes' parapro.  We have parent-teacher conferences on Friday so we'll find out why she's not responding.
Posted by Liene at 10/26/2010 02:07:00 PM