What Happens In Vegas... 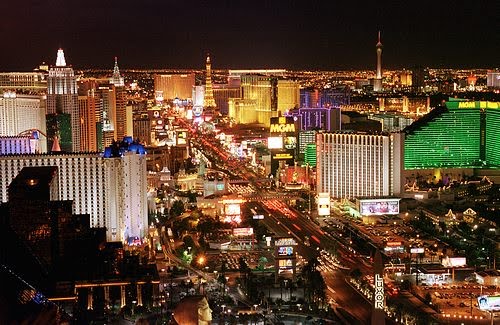 doesn't stay in Vegas.  At least not this time.  On Tuesday I flew out to Vegas to visit my friend Sal.  I met Sal in 2003 while stationed in California.  I love this lady to death and really wish we closer.  She's a native NY that speaks her mind and doesn't care what you think.  We have A LOT in common.  We've both had health issues, fertility issues, I did the adoption thing, she and her husband are currently doing the adoption thing (and I hope it happens for them very quickly), we've the the military thing and our personalities are similar.  We only went to the Strip twice in the 5 days I was there.  I wasn't there to party.  I was there to visit my friend who I haven't seen in 4 1/2 yrs.  I needed to relax and unwind.  I was perfectly content sitting around at her house talking.  And we talked.  And we talked.  And we talked some more.  It was great to have some me time with her even though I did miss my kids and husband.  We ate out most of the time.  Sal cooked for me once.  A delicious penne in vodka sauce with prosciutto and a salad.  Sal's Italian and she is a very good cook!

On Friday we met up with our friend Sadie that we were stationed with in California who was now in Vegas with Sal for lunch.  We started our lunch around 11:45 and finally left the restaurant at 4:15.  Seriously!  The 3 of us would just not shut up.  Oh how I miss all the girls I became friends with in California.  I think one of these days we will have a big reunion somewhere (hopefully in the Caribbean without the hubby's and kids) and have a good time.  It was so very good to see Sadie.

I got home last night on a flight that was dodging thunderstorms in the Southeast.  The ride was honestly not very bumpy but you could tell that a few people were not liking it.  I also come home ill.  On Wednesday night/Thursday morning I was feeling off.  I thought it was the jet lag.  Vegas is 3 hours behind Atlanta.  We went to bed after midnight the night I got there which was 3 am eastern time.  I had been up for 21 hours!  Sort of.  I got on the plane and took a 3 1/2 hour siesta.  I was barely awake when the airplane was taxiing down the runway for takeoff.  Still, it was way late.  And pretty much every night we were up late and I was going to bed after 3 am eastern time.  The weather was crazy cold Wednesday and Thursday in Vegas.  Highs only in the upper 50's which is completely unheard of this time of year there.  So I was wearing turtlenecks and sweaters on those days with jeans.  Then on Thursday it was back in to the mid 70's.  I figured the crazy weather was making me catch a cold.  I felt good during the day but at night, I felt really icky.  So I bought some Tylenol.cold and started taking it.  It helped but not really.  So by Friday night the entire left side of my face was in massive pain.  It felt like someone was trying to drive a nail between my upper teeth and my cheekbone.  I came home and immediately got online because I knew that feeling was not something that accompanied a head cold.  Lane said from experience it sounded like a sinus infection and sure enough, the symptoms I looked up for a sinus infection was exactly what I was feeling.  I decide there was no way I was waiting until Monday morning to call my Dr in hopes of getting an appointment for that day so I dragged myself into Urgent Care.  I walked out with a prescript for antibiotics because I sure did have a nasty sinus infection.  I'm hoping the antibiotics kick in soon.  I've got a busy week ahead of me!