The first few pictures are of our trip down to Robins AFB last Tuesday.  My friend Jen took us to the Air Museum there which is really, really big and really, really neat!  The kids had a lot of fun.  We did have a hard time keeping Emi away from the airplanes on display.  There were quite a few dashes under the barriers around the airplanes.  And I'm sure she was thinking, "Gee Mom & Dad, I just wanted a closer look!"  So Lane was having to duck under and give chase to Emi who also thought it was hilarious that daddy had to go after her. 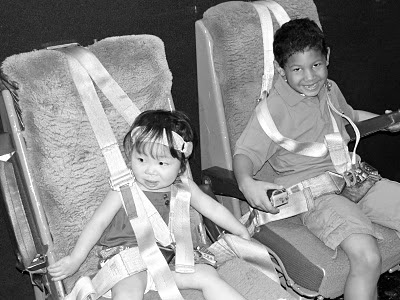 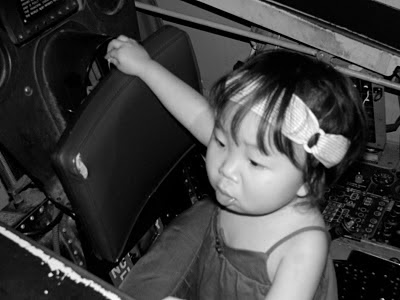 I put the photos in black & white because inside the air museum it was pretty dark and if I turned off the flash the photos came out dark.  If I used the flash, it washed them out.  In black & white, you can't see any of that.  Eriks & Emi especially enjoyed sitting in the cockpit as you can see from above.

Sunday before church Emi pulled out medical play equipment.  It was so cute watching her.  She used the play shot like the little syringes the drugstore gives to administer liquid meds to little kids.  It looked similar so why not?  It was so cute to watch her put the stethoscope around her neck.  She has changed so much in the 9 months she's been home.  I'm still in shock that we are approaching a year of being a family of 4. 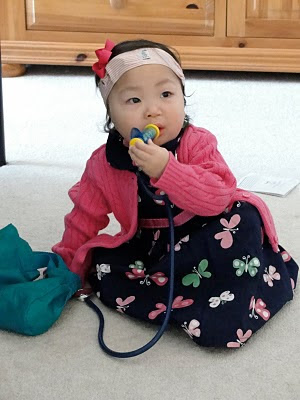 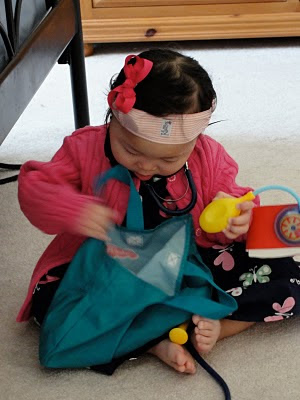 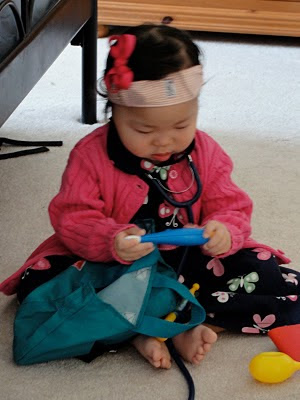 And lastly, Lane celebrated another birthday on Monday.  The weather was beautiful and we went to a fairly new Mexican restaurant nearby called Mojave.  I started out with the steak & lobster enchilladas and Lane had fish tacos.  However, halfway through, I couldn't handle the saltiness of mine and asked to switch.  I have to watch my sodium intake so I'm not fond of really salty things.  Lane's fish tacos were delish and had some sort of yummy slaw that had a cucumber/cilantro/wasabi sauce.  Next time I go back I'm getting the fish tacos.  We came home and had a very yummy cake from Cold.stone Creamery.  Lane has a weakness for ice cream so why not get him an ice cream cake.  He was really, really happy about my choice. 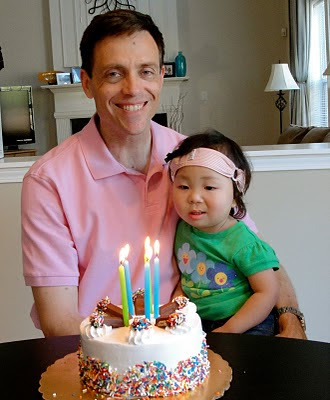 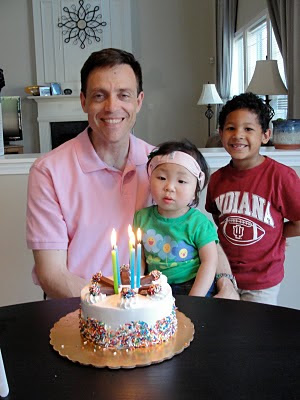 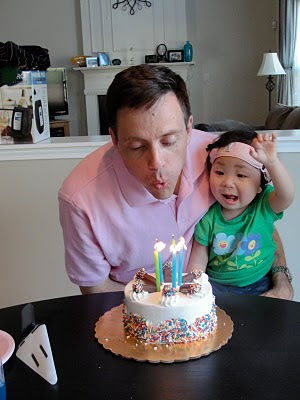 Obviously in the last photo, Emi was excited Daddy was doing an awesome job blowing out his candles.

All is quite on the home front for now.  Emi had speech therapy this morning and slowly we are progressing.  The focus right now is just teaching her to move the air over her lips.  We actually got her to say the word 'on'.  We're really trying to work the 'Bs' and the 'Ps'.  We've gotten a 'b' sound a few times, but more than not we get lip smacking instead.  But the therapist said that's a move in the right direction.  Just need to keep encouraging her to blow things - bubbles, pinwheels, cotton balls, etc.
Posted by Liene at 4/14/2010 01:00:00 PM