I Am Not A Cupcake Mom 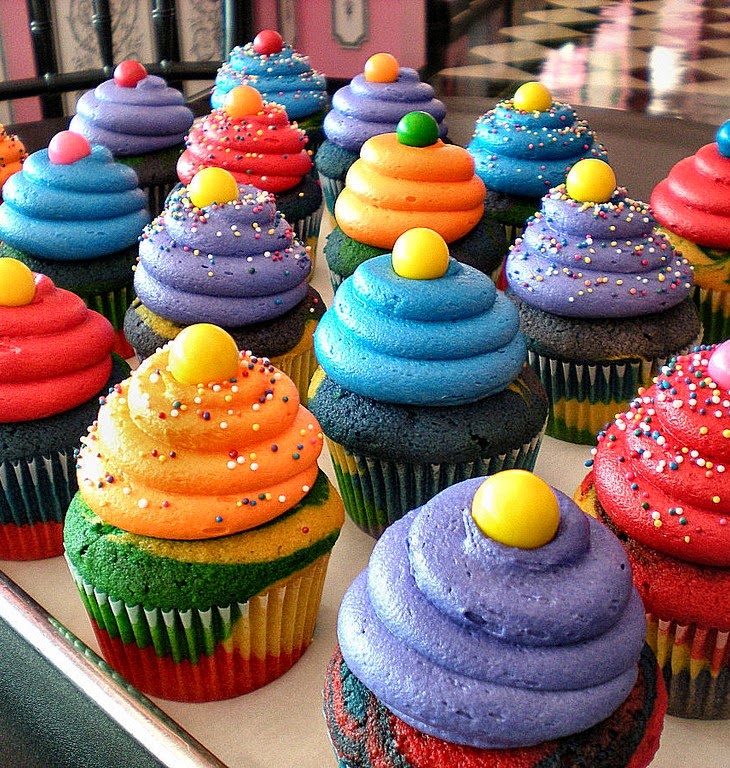 I had struggled for a long time whether or not this made me a bad mom.  It is now the trend that when kids have birthdays they take treats into school to share with their classmates.  Usually cupcakes.  When my kids started school, I rolled my eyes at this.  Really?  We have to make a big deal about birthdays at school?  Why?  Oh and don't get me started on the Halloween and Valentine's Day nonsense at school.  Who decided that kids needed to bring in treat bags for classmates on those holidays?  Nevermind, I know exactly who...Hallmark, Nestle, Hershey's and every other company that could make a dime off of this crap.  Mattel, Crayola...they're all in on it.  It's a conspiracy against parents to make them feel like crap if they don't.

I'm going to date myself but I grew up in an age where you went to school, your teacher and classmates often wished you a 'Happy Birthday' and that was the end of it.  No mom's making or buying special treats to either bring in or send in to school.  You went home and had birthday cake with your family.

So when Eriks started pre-K, I caved and followed the trend.  I didn't want to be seen as THAT mom.  You know, the one who is lazy...doesn't care...doesn't have time..(insert your own reason here).  So I took in cupcakes to his class.  Especially since I was hearing about all the treats the other moms were sending in.  Heaven forbid my child scolds me because I made him feel like an outcast because I didn't send in treats for his birthday.  I didn't want to feel like a dog that had had an accident right next to the door waiting to be let outside.  I've never dealt well with being reprimanded for my mistakes because even though I know better, I'm the person that takes them personally.  But that's for another time and another blog post...maybe.

Kindergarten year, I think I caved as well, but don't remember.  See?  That's how important I think this school birthday nonsense is.  From then on I gave up.  With one exception.  The 1st year Emi was in preschool, I sent in birthday donuts.  Even though neither one of them remembers it,  I had to be on equal footing with both kids.  You can't do it for one and not the other.  Because you know, if you don't do it for kid #2, when your 75, losing your memory and the kids are deciding what nursing home to put you in, it might come back to bite you in the ass with kid #2.  She may do something to spite you all because you didn't send in some birthday treat but you did for her older brother.

Trust me it's not easy.  Although I think where Eriks goes to school now there isn't a whole lot of birthday treats happening for a few reasons.  The school really doesn't want the distraction and many of the kids who Eriks goes to school with are from families of 5, 6, 7 and 8 kids.  We are the minority at his school with only 2 kids.  I'm sure those families who have 3 and 4 or 5 kids at his school don't have time for this stuff.  I know if I had that many kids, I sure as heck wouldn't.  Ditto goes for Emi.  I don't think it's popular at her school either partly because there are enough kids who live in the dorms during the week away from their families so there isn't anyone there to do it for them.  But at Latvian school we are definitely the odd family out.  In the 3 years we have been there we have never brought treats in to school and most of the other families do.

I've come to terms with giving up and no longer sending my kids in with birthday treats.  Personally, I think my reasons are valid.

1 - My parents didn't do it, so I shouldn't feel guilty because I'm choosing not to.  It wasn't the thing to do then and why should I feel obligated to do the trendy thing.  I don't do trendy.  I do Liene.

2 - I'm sure the teachers really don't appreciate the time they're taking out of their day to distribute your child's birthday treats and allow them to eat them.  Two words...SUGAR RUSH.  Bet the teachers don't like that either.  Luckily my kids are in small classes.  Eriks has 6 kids total in his 4th grade class and Emi's class may be up to 9 kids now.  I can only imagine what it would be like in a classroom of 25 kids whose systems are loaded with sugar.  Not to mention those kids with food allergies and sensitivities.  Then you have to make sure you find them their own special and appropriate treat so they're not left out...As we say in Latvian, "Nē paldies!!" (No Thank You!)

3 - I am cursed, blessed with a son who made his way into this world exactly 1 week before Christmas and a daughter who was born 4 days before Valentine's Day.  Seriously?  Those holidays scream candy and over indulgence.  They get enough sweet treats around those days, plus birthday cake that they don't need another treat on top of that.

So no, I am DEFINITELY not a cupcake mom and no longer feel guilty about it.  If that makes me a bad mom, so be it.  My guess is that most teachers and parents are thankful for that as they're not having to deal with sugared out kids at school.
Posted by Liene at 4/14/2014 05:14:00 PM