Been a Few Weeks

Not much has happened within the past few weeks so that's why I've been MIA.  The weather for early November has been glorious.  Our temps have been in the low to mid 70's for the most part.  Today however it's 55 and rainy.  But I can't complain about the rain.  We have a severe shortage of rain for the year.  From what I know we're in the neighborhood of 8-10 inches behind in the precipitation department.  The rain that will fall today and tomorrow is very, very welcome.

Emi is getting more into role playing.  She's spending more time cooking at her kitchen, rocking her babies and playing with her dollhouse.  It's so cute to see her cover up her babies and put her finger in front of her mouth in a shushing gesture.  Then she makes the sign for sleep.  Emi is also into everything!  Her latest is she's gone onto our desktop computer and renamed a bunch of files that we now have to figure out what they are.  The result is that our computer is now password protected so she can't just climb up, jump on and start clicking away.  Never underestimate the intelligence of a 2 yr old.  We didn't have this issue with Eriks so we didn't think Emi would cause trouble either.  WRONG!

We have one really great piece of news to share.  It involves this: 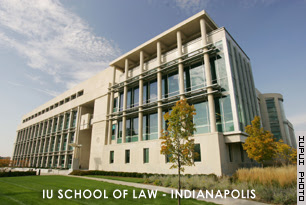 On Saturday, Lane received his acceptance letter for law school.  He'll be starting next fall.  We're moving back to Indiana next summer definitely now.  We were about 95% sure but of course nothing was final until we got word that he got in.  Now we're house hunting.  Scary!  After a 15 yr absence, I'm going home next June.  It's definitely weird to know that we won't be moving every 3 yrs anymore.  In the 40 some years Lane has been alive he will no longer be a nomad.  He grew up a military brat and then joined after college.  Even in college he was a nomad because he was in a work study program splitting his time between TX & NM.  The kids, well at least Eriks because Emi doesn't quite understand yet, are excited.  He's ready to be with his cousins and grandparents.