Saturday morning started out much like Friday - rainy.  The good news was that the rain was just about over so we decided we'd spend the morning in the resort so Emi could get in an early nap and then we'd head over to the Magic Kingdom for the afternoon/early evening.

The rain cleared out around 11ish and about 1 after Emi woke up, we headed out.  We stopped in the park to grab lunch.  We stopped to take some photos with the wooden soldiers they had up near the entrance but unfortunately, some kid decided to join in our photo.  My parents photo turned out great.  On the way to the restaurant as we were walking down Main Street USA, they had this mini-parade come down the street so we stopped to watch. 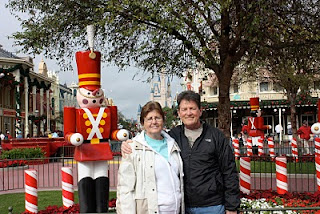 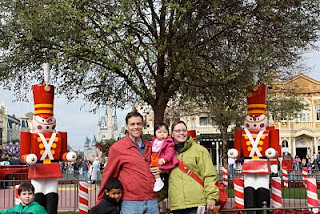 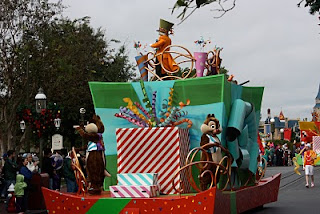 After lunch Eriks just had to ride some rides.  We headed back to Fantasyland since we were almost there.  The first one we rode was the Tea Cups.  My mom went in one with Eriks and Lane and I had Emi.  We weren't sure how she was going to do with the spinning.  She loved it.  Not only did she have a huge grin on her face, she was laughing.  It was a hit! 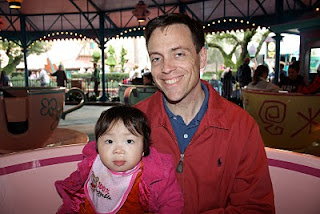 We then wandered into Mickey's Toontown where we went into Minnie Mouse's house and Eriks rode Goofy's Barnstormer rollercoaster.  He loved it.  It was not his 1st roller coaster ride.  The 1st one he went on was Big Thunder Mountain at the Magic Kingdom the year before.  I think our kids just like their parents are going to be roller coaster enthusiasts.  Unfortunately with my pacemaker, I can't ride them anymore :-(

By the time we got done in Mickey's Toontown it was after 5pm and close to parade time.  I also need to mention that this day was the coldest day we were there.  The temperature started in the low 60's and dropped as the day progressed.  So by the time the parade rolled around it was easily in the low to mid 50's.  I was super thankful I packed all of us fairly heavy-weight jackets.  It was kind of weird watching a parade as the sun was getting ready to set.  All of our previous trips to Disney had been when the sun doesn't set until about 7pm or later.  The parade was cute.  I also got a photo of Cinderella's castle at sunset which I thought was kind of cool. 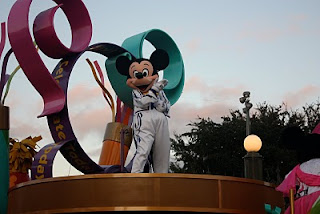 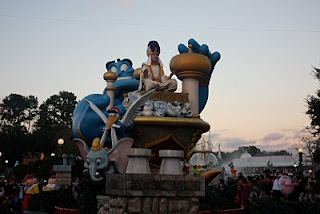 We also stayed for the lighting of Cinderella's Castle.  That in itself was so amazing it was worth sitting in the cold weather.  It's too difficult to even describe how I felt when all the lights came on.  I felt the same way when we watched them turn the lights on at the Osborne light display.  It definitely made me feel about 8 yrs old again.  I guess it was pretty "magical". 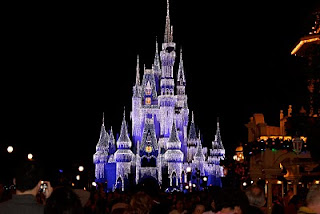 After the lighting, we had to get over to the Contemporary resort for dinner at the Wave.  It's a pretty new restaurant there.  I know it wasn't open when we were there last April.  My mom and I both ordered drinks.  She had a margarita and and I had this drink that had a reusable flashing ice cube in it.  It was pretty and I got to keep it.  Dinner was fantastic!!  And dessert was really great too.  So great, I had to take a photo of it before I ate it. 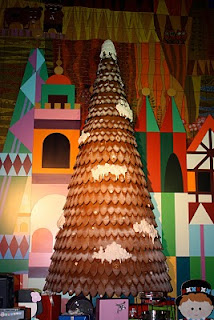 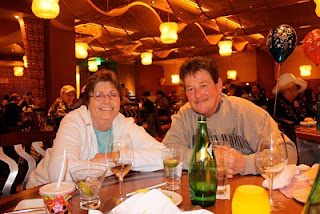 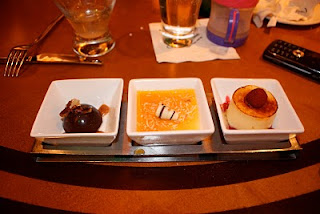