Emi's surgery went well.  There were ups and downs and it was a long 24 hrs in the hospital. 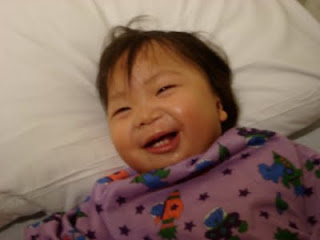 (On goofy juice.  This is one of the photos after she spent some time falling backwards into the pillow and laughing.)

Before surgery they gave her Versed (aka goofy juice) which really did make Emi goofy.  I hate to use this term but there's no other way to really describe it - she was like a drunk little person.  She'd try to take a few steps and stagger.  She was sitting on the gurney and bonked head first into the pillow and began laughing.  We laughed too and seeing us laugh, she did it repeatedly.  She was a huge entertainer while we waited.  However, that being said, although the Versed made her very happy before surgery, it made her extremely agitated after.  She could not be consoled for the life of us.  When we did calm her down, she'd sleep for about 15 to 20 minutes and it would start over again.  She also refused to open her eyes so she couldn't see that she was back with mom & dad.  Trying to put her down in the hospital crib was a big no-no.  She started to alligator roll and would get caught in the IV cord and other monitors they had.  It was not only hard on her but exhausting on us.  She finally started to open her eyes around 10 pm and calmed down a bit, but it wasn't until about midnight that she finally settled and slept for the next 6 1/2 hrs.  So for further reference, if she needs any more surgery as a child, no Versed! 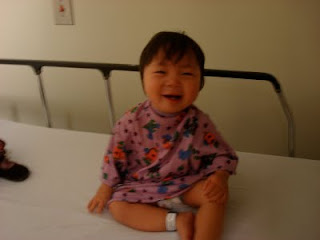 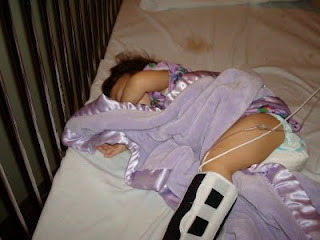 (The 1st photo is still on goofy juice.  The 2nd is her finally sleeping.  They had to put the IV in her foot and I think that was part of the problem.  They used these protective sleeves on her that I think were also making her very mad.)

Saturday morning she woke up and was a much happier girl.  She started drinking and eating even though she was swollen and likely hurting still.  Because she was eating and drinking they sent her home. 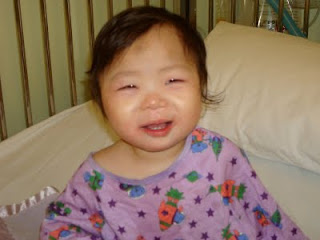 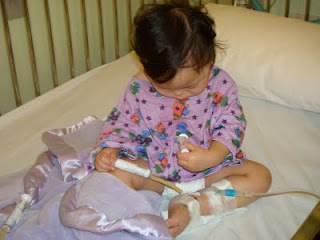 (In the 1st photo here's a happier girl than the night before.  In the 2nd, she's giving herself shots with the syringes they used to get oral medicine into her.  We brought them home and she and Eriks like to play with them together.  Too cute!)

Now that we've been home about 2 days she's a happy little girl who is sleeping a lot still but isn't that interested in food.  She is eating yogurt & jell-o but that's about it.  So we started making her drink Pedia*sure so that she gets the nutrients she needs still.  She's still swollen and I'm sure that's probably why she isn't eating a whole lot.  But things are moving in the right direction so that's what is important.

We are heading to San Antonio tomorrow for Thanksgiving with Lane's parents.  It's been awhile since we've been to visit them so I am looking forward to it.  I just hope we can keep Emi entertained on the airplane.
Posted by Liene at 11/23/2009 11:44:00 AM