While Eriks was in Texas with grandma and grandpa at the end of July, we had a bunch of time with Emi all by herself.  It's amazing how differently your children behave when the other one is not around.  Don't get me wrong, Emi had her moments and there is the possibility that being by herself without her brother for 10 days helped turn her into a sassy little diva (more on that in another post), but Emi was a well-behaved and fun kid to be with.  Not the normal whiny, clingy kid she tends to be when her brother is around.

Anyhow.  The insert foot in mouth moment actually happened with my daughter when I had some time with her all by myself.  Lane left the house for some alone time and Emi and I were playing.  I unfortunately was cursed with cuticles that are dry, brittle and tend to rip easily.  That's exactly what happened while we were playing and I started bleeding.  Because I'm on blood thinners, I tend to bleed easily so I went to the bathroom to get a band-aid.  Here's the conversation between Emi and me and the insert foot in mouth moment.

Of course she's deaf.  She hears nothing without that very expensive hearing aid on her head, which she did have on her head at the time.  I realized later on, she's at that age where they're gaining independence and really grasping onto things and now that her new hearing aid is processing sound better and amplifying it better, her brain is processing the information more and more so she learns sounds, names of objects, etc.  All things that were harder for her to recognize with the old piece of garbage she had for a hearing aid before.  She had just had the the new hearing aid for about 6 weeks when this incident happened.

I laughed hysterically at my gaffe.  Everyone who I tell the story to laughs at it.  This morning when I ran into her teacher from last year, I told her the story and she laughed harder than I think I've ever seen her laugh.  She herself is the parent of a hearing child and a deaf child just like me and she says all of us have done stuff like that.  Sometimes we work so hard to ignore the disability and treat them like the average kid, we forgot and so the insert foot in mouth moments happen.

We'll see what else life will bring us as she continues to hear better and her vocabulary continues to grow.  One of these days I'm hoping to get her saying the word, annoying on video so I can post it here.  She does have her I'm going to be a complete pest moments with electronic objects like her play cell phone, her leap pad, etc. and she's pushing buttons over and over again and I have to say, "Emi please stop pushing the buttons.  It's annoying." She in turn says, "Annoying?"  Yes.  Totally.  Utterly. Annoying.  Hearing her say the word is so cute and funny.

And with that.  I will leave you with a photo of our cute, sassy, diva on the rise, Miss Emi. 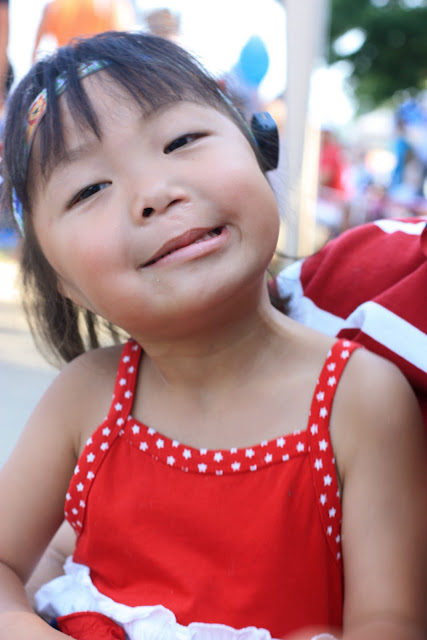