I haven't talked much about my health.  Not because I haven't wanted to, but because I've never wanted to make a big deal of it.  I just want to be "normal".  The truth is, I'm not "normal".  At least not physically and anatomically.  My heart is not normal.  It will only be normal if and when the time comes to have a heart transplant.

Why am I discussing this now?  Because from April 28th - May 1st, for the first time in my life, I truly felt normal.

I went to Los Angele$ for the 6th annual ACHA conference.  My whole life I knew there were others like me.  Kids who were born with heart defects that would keep them from being "normal".  When I use the term - what "normal" means to people like us - are people who can walk multiple flights of stairs without getting winded, run multiple miles on end, swim laps like they're being chased by sharks.  Does that make sense?

I'm going to try and give you a little lesson on CHD anatomy.  People who have CHD (Congenital Heart Disease) have limitations.  Our hearts and lungs can't keep up because they don't function the way anatomically correct hearts can.  Many of us are missing chambers to our hearts.  A normal heart has 4 chambers, most CHDers have 2 or 3.  My heart has 2.  I have a ventricle and an atria.  Most of you reading this have 2 of each.  Due to the lack of the 4 chambers that a normal heart has, my 2 chambers have to do twice the work.  Our blood doesn't circulate properly and get the full amount of oxygen it needs.  People with normal hearts have O2 saturation rates of 97% - 100%.  CHD patients average 80% - 85%.  Like I said that's average.  There are those with lower and higher rates.  My "normal" saturation rate runs between 83% and 87%, which is really very good.  With that being said, too much higher and it could actually be bad.  I could continue typing for days and still not cover it all but I figured I had to give you some basics to understand.  My actual medical diagnosis is as follows - Mitral Valve Atresia, Multiple VSD (ventricular septal defect), Hypoplastic Left Ventricle (aka Hypoplastic Left Heart Syndrome or HLHS), Transposition of the Great Vessels (TGA), Pulmonary Atresia, Atrial Fibrillation.  Quite a mouthful isn't it?

Now that I've given you a little lesson on CHD, back to the conference in L.A.  As I was saying, being there made me feel normal.  How many conferences can you go to and get compliments on how pretty your chest incision scar is?  It's totally different than being gawked at by people trying to figure out why I have this huge scar that starts at the top of my chest and goes down.  At the conference we all knew why we had those scars - heart surgery.  Simple as that.  And to us it's no big deal.  It's just a part of who we are.

I met some awesome, awesome people.  Some very inspiring people.  I've never felt sorry for myself but I've had way too many occasions where I have felt very frustrated having a CHD.  Seeing some of the accomplishments of others has made me realize that despite my limitations, there is so much more I can do.  One of the CHD doctors at the conference is a CHD patient himself.  It was his own heart condition that gave him the drive to work in medicine.  One of the CHD patients that I met is in med school working on becoming a pediatric cardiology surgeon.  Another patient I met biked 20+ miles to raise money for CHD.  The list goes on and on.  I didn't even realize that CHD patients could do this kind of stuff.

There's one couple I met in particular that really gave me the drive to want to do more as a CHD patient and in the CHD world.  Jeni is a CHD patient who like me has HLHS.  Nick is her husband and so in love with Jeni.  It was so cute the way he looked at her.  Both have this incredible passion about CHD.  They both volunteer/work at a camp specifically designed for kids with CHD.  Many of the younger, and when I say younger, I mean in their early to mid 20's CHD patients went to these heart camps and in turn have volunteered their time as adults at these camps.  Some of them are still involved with heart camps.  I didn't even know there were camps for CHD patients out there.  I don't even know if they were around when I was a kids because I so would've wanted to go.  As a kid I think it would've made me much more comfortable in my skin.  One of the most mind-blowing things that both of them are doing this summer is they are biking from San Francisco to NYC to raise money for CHD research.  Nick is actually doing the majority of the biking.  Jeni said she was just biking out of the big cities with Nick.  The rest of the time she was going to be in a support vehicle.  They will be biking through northern IN at the beginning of July not long after we move back and I'd really like to be there to cheer them on.  Plus, I want Lane to meet them and I want them to meet our kids which they loved seeing multiple photos of.

There are things I didn't expect from this conference.  The first is how emotionally draining it was.  Not in a bad way.  I had so many conversations that involved tears.  Tears because we have dealt with so many of the same issues.  Not being able to have biological children because it could kill us.  Short hospital stays that turned into longer hospital stays.  One of the big ones is how much our "normal" friends take all the stuff they can do and their lives for granted.  Don't get me wrong, I complain about things and I know there's some stuff I take for granted.  It's just our human nature.  There are days I complain a lot.  But there are 2 things that really bother us CHD patients.  The first is milestone birthdays - 30, 40, 50...  If I had a dollar for every time I heard someone I know complain about turning any one of the above ages, I'd have a condo in the Caribbean I could escape to.  For us CHDers, hitting milestone birthdays is a BIG, BIG deal.  I was thrilled to turn 30.  In 4 yrs I will be turning 40 and can't wait.  Not many people get excited about turning the big 4-0 but I am.  It means that those doctors who told me I would likely not live to see my teens were wrong.  I'm still here and I'm a wife and a mom and I'm still breathing!  There are other things I want to be that I'm working on.  Photographer is one of them.  It really makes me sad that people don't look forward to getting older.  We CHDers celebrate it.  It means we've been given one more year of seeing the sunrise.  Smelling the flowers.  You get it.  A small FYI, it's fine for you to complain about milestone birthdays to people who don't have major health issues.  It's not OK to complain to us!  The other thing that really bothers us is you'll never be faced with the likelihood of a heart transplant.  I'm jealous that it's not a weight on your shoulders.  I can almost guarantee you that most CHDers when we go to see our cardiologists are worried that we're going to be given the news that our hearts aren't functioning as well as the last time and the prospect of surgery or transplant is on the horizon.  A few of us CHDers at the conference actually joked though that you can put us under the knife, but don't bring a needle anywhere near us.

I also didn't expect that I'd have so many instant friends.  There is no judgement in the CHD world.  We all have different types of defects, but we all have hearts that are sick.  I didn't have to worry about what someone was going to think of me.  I didn't have to impress anyone.  As I said at the beginning of my post, I felt normal.  I also fell in love with the CHD community.  This group will always have my back and I'll have theirs.  Their support is amazing.  I am so thrilled to be a part of it.  We compared surgeries and medications and how both made/make us feel.  Normal.  To a non-CHDer it would've been boring and over your head in about 30 seconds.  We talked about this stuff for hours!  Conversations didn't want to end.  I don't think any of wanted the conference to end either.

My one regret about the conference is that Lane wasn't there.  I was happy to have some time to myself but it would've been an awesome experience for him to meet other spouses of CHDers and to learn many of the things I learned.  It's one thing to be there physically and hear all this information.  It's another thing to try and regurgitate it to someone who wasn't there.  It's very difficult.  I still haven't been quite able to wrap my head around it all and it's only been 10 days since the end of the conference.

The next conference isn't for another 2 years and I'm already looking forward to it.  That's just how incredible it was for me.  I didn't take a lot of photos but I want to share the few that I did.  I miss my new CHD family so much.  To my CHD friends who will read this post, thank you for being like me and becoming my friend and sharing your lives and stories with me. 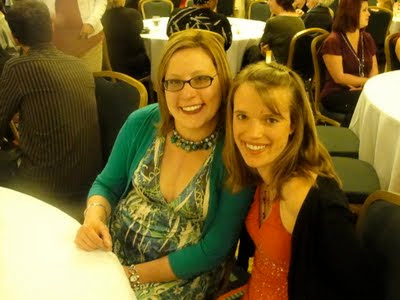 My new friend Jeni.  She is so amazing and I want to be more like her. 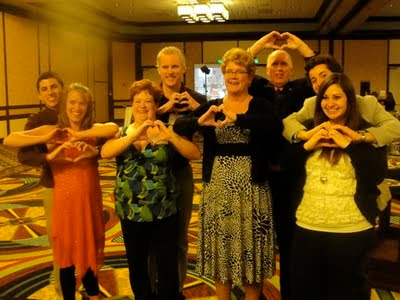 CHD patients and their spouses. 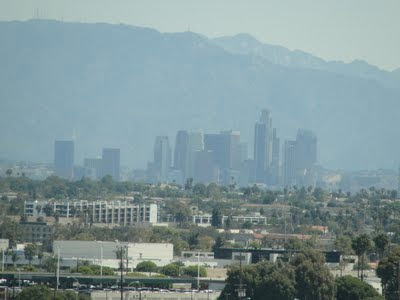 Downtown LA skyline from my hotel room w/ zoom lens.  After living here for 3 yrs and how typically smoggy it is, I was surprised that I could see it that well.  Some of the locals I met at conference said that LA has been working on the air quality. 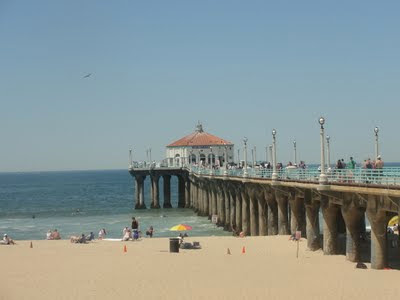 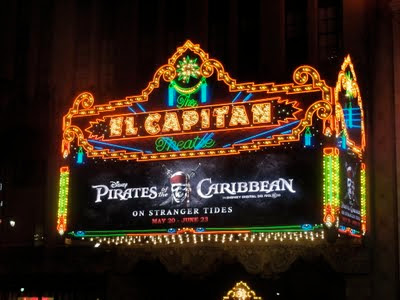 On the Hollywood Strip.  The famous theater was advertising the new PoC movie coming out.
For those of you who want more info on Nick and Jeni's ride from Frisco to NYC, here's the website.  They would love your physical or monetary support. The CHF would love your support.


Here's some CHD facts:
Approximately 40,000 babies are born every year in the US with some form of CHD (that equates to approximately 1 out of 125 born are born with CHD).
There are approximately 35 different types of CHD.
CHD is THE #1 birth defect among babies born in the US.  More than any other birth defect.
There are approximately 800,000 adults and children in the US living with CHD.
CHD research is drastically underfunded, ie. very little money goes to research to make life better for those living with CHD.
Posted by Liene at 5/11/2011 10:50:00 AM