The Kids in Pictures

It's been awhile since I've posted photos of the kids.  I have been swamped over the past 2 weeks.  Last week I had to have the brakes replaced in my car.  That was an expensive trip to the mechanic but it had to be done.  Emi has a cold this week that she has shared with both Lane and I.  Although hers is far worse than ours.  I'm hoping that I am nearly over mine but I have been coughing up junk and I sound like a frog.

Emi and I leave the boys on Tuesday as we jet off to Dallas for 5 days.  We're going to visit Lane's sister, Marla and her husband and their son, M.  I have yet to meet M and he is nearly 7 months old!!  Eriks & Emi met him in early June while Lane and I were having a ball in New York.  They also bought a new house last year that I haven't seen either.  So the girls are going to leave and have some fun for a few days.  Grandma & Grandpa (Lane's parents) are coming up from San Antonio next weekend so we'll get to see them too!

Eriks only has 2 more soccer games this season.  Right now they stand at 1-2-2.  I'm hoping the last 2 games are wins.  But if not, that's OK too.  Eriks has grown as a player so much more this season that he did when he was playing in the Spring.  We're proud that he is doing so well in soccer.  He's doing well in school too.  His reading level has grown a lot as well and is now requesting to read Magic Treehouse books by himself!

Emi is doing well.  She is signing more which means we are having to learn more signs to teach her.  Speech is still slow but at least it is progressing.  There are definitely more sounds coming out of her mouth, we just wish they were more recognizable.  After we return from our girls trip, we will look into doing speech therapy 2x's a week rather than just one.  It will be better for her if we do.  Emi is getting sassier by the minute.  I've tried to get her attention while she has been engrossed in other things and will look at me and sign and say, "No".  I also scolded her for not listening and she pointed her finger at me and gave me a lecture back in her babble.  It was so hard not to laugh at her. 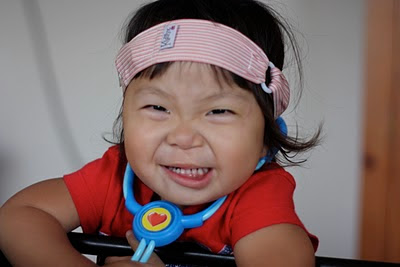 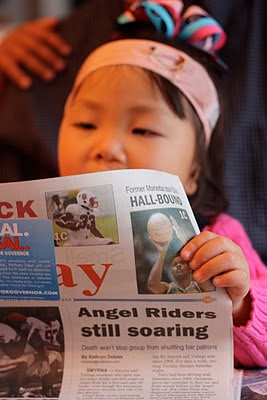 Reading the Sunday paper with daddy after church last weekend. 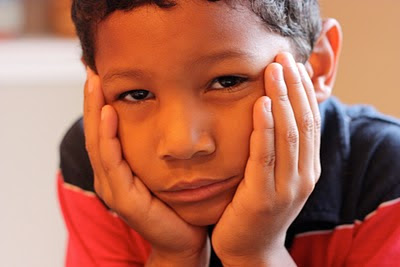 He has such a sweet face.  I just wish he would stop thinking the world was always out to get him. 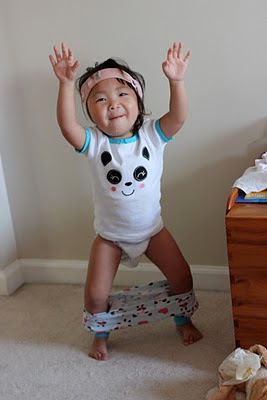 I have no idea what happened here.  I was doing something and I turned around and saw this.  Luckily, my camera was out and she was more than happy to continue posing.  She is so stinking silly.
Posted by Liene at 10/03/2010 05:17:00 PM